How do I thermally shock test sensitive instrumentation?

Environmental conditions have a great effect on the functionality and reliability of electronic components, devices, and systems. In order to discover latent weaknesses in the shortest possible time, a typical temperature test is often insufficient; test specimens must be subjected to multiple, abrupt temperature changes.

The Weiss Technik ShockEvent is a great solution to perform these tests with the ability to perform extremely rapid temperature changes in the range from -80 °C to +220 °C by moving your device under test (DUT) from a hot compartment to a cold compartment.

But how do you test devices which are sensitive to vibration or energised? The all new Weiss Technik ShockEvent D provides the solution.

The ShockEvent D Damper Shock Test Chamber uses a stationary test space. Temperature controlled hot and cold air is generated in chambers above and below the test space. Using dampers, the air can be led to the test specimen as opposed to the standard ShockEvent where the device under test is moved from a hot to a cold compartment. 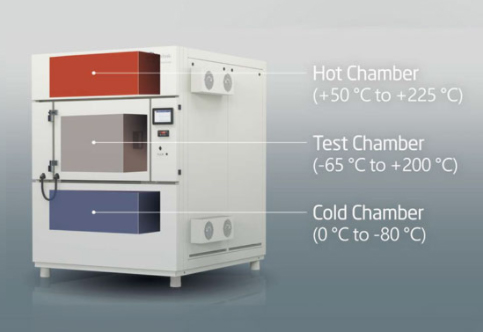 The ShockEvent D design makes it ideal for testing vibration sensitive devices or devices which need to be energised during the test cycle. It fulfils the requirements for standardised temperature stress tests such as the Japanese standard JASO D-014-4 and ED-2513B Na and various grades of MIL-STD-883H and 202G.

Furthermore, the new ShockEvent D is designed as a two or three zone shock tester, which now allows for ambient air to flow in enabling testing at three separate temperatures.  As the test space is stationary this also provides for easy routing of cables into the chamber.  Cables remain stationary and aren’t required to move as is the case for the original ShockEvent Test Chamber.

It is supplied with R-23 refrigerant or optionally the all new R-469A which has a GWP (Global Warming Potential) of 1.357 which achieves a reduction of the CO2 equivalent of over 90% compared to R-23 and complies with European F-Gas regulations due to be implemented in 2030.

What is accelerated aging testing?

Accelerated aging testing uses a combination of accelerated stresses to expose product flaws in the design and manufacturing of a product. This serves to improve product reliability and reduce field failures and warranty expenses.